I’m pleased to announce that a 4-track EP of my ambient guitar work entitled “The Ghost of an Idea” is now available for purchase digitally. This week’s project was getting a page built for it on the chromedecay site, and organizing all the other stuff associated with publicizing the record’s digital release. This record came together at the beginning of December 2009, when my longtime friend and musical collaborator Rob Theakson sent me the following text message: 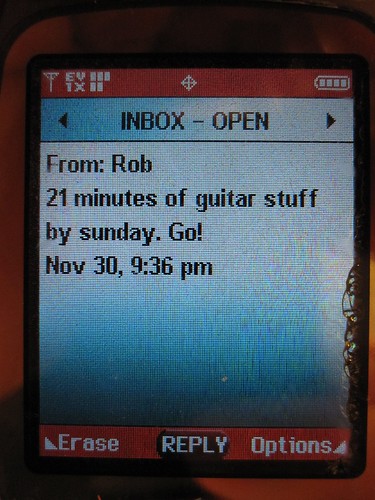 That was on a Monday night, giving me 6 days to produce 21 minutes of music. Now, if this had been anybody but Rob, I would probably have laughed at the idea, and given it no further thought. However, Rob is one of my best friends (as previously mentioned) and he has a way of convincing me that crazy ideas are actually good ones.

I found myself staying late at my church on Tuesday of that week and recording a bunch of guitar improvisations after band practice ended. I had a very loose idea of what it should sound like, along with a rough conceptural framework to hang it on.

The title of the record, “The Ghost of an Idea”, is taken from the prologue of Charles Dickens’ classic “A Christmas Carol”; the four track titles are abbreviated forms of chapter titles. As I started thinking about the story and how it’s structured, I was inspired by the complex and emotional memories in it, as well as the idea of the Holy Ghost inhabiting and inspiring artistic works of diverse forms.

That gave me just enough to go on. I took a guitar piece I’d previously recorded for Rob but which had never been released, and that became “The First”. The other 3 pieces were based on these guitar improvisations, which were edited and layered in Logic Audio (much like “6 strings for a winter’s day“, my earlier ambient guitar work).

The cover image is a photo of a house in Ypsilanti that I took last summer: 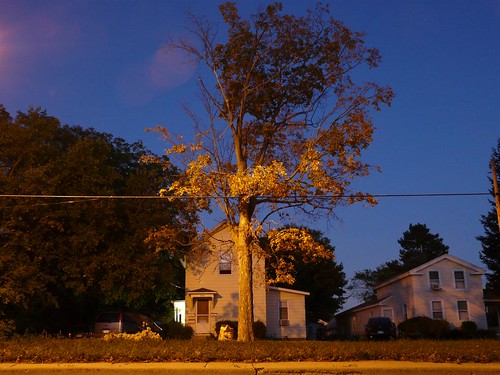 Once I delivered the final mixes to Rob, he quickly pressed up 50 copies of the record as a 3″ CD, which is one format that his boutique label releases music on. A number of copies made their way to me, and I sold the majority to recipients of my email list in the following week or so. I have a few left to sell at shows, but that’s it, so I realized it made sense to also offer this digitally.

After looking into my options, I found that RouteNote seemed to make the most sense for this release. Its major difference from other digital distribution companies like CDBaby (who I use for most of my digital distribution, especially for releases that are also available as physical CDs) is that RouteNote doesn’t charge a fee upfront, but instead takes a slightly larger percentage of each MP3 sold. For a release with such a small number of tracks, it would take quite a bit of sales to recoup even the $55 setup fee that CDBaby charges, so it seemed to make sense.

I’m very please that this is now available; RouteNote has distributed it to the Amazon MP3 Store and eMusic. It will be available via iTunes very soon.

You can also check out the growing selection of other releases on chromedecay, both by me and others.

I’ve decided to engage in a new project for 2010, called “52 things”. Every week for the entire year, I will be uploading some new thing to the chromedecay site, for a total of 52 projects. This project was inspired by a number of similar “thing a day” or “thing a week” projects, especially the excellent Dust Breeding project run by Marcus Fischer (who has been mentioned here before).

These projects will range from photography to music to code to videos and even physical objects. Each week, I’ll upload the entry and include some notes about the project and the process behind it.

This first week’s project is this site itself. For the past 5 years or more, chromedecay has run as a mixture of blogging software, custom PHP code, and HTML. Today, all that is changing. For the past few months, I’ve been slowly working on getting the latest WordPress installed, migrating the site’s content, configuring plugins, and other such things.

The chromedecay site is now fully powered by the latest version of WordPress, and all content now exists as Pages inside WordPress. While that might not mean a lot to you, for me it means the ability to add to and change the site more easily, as well as opening it up to more collaboration with people like Joshua Schnable, who has his own set of projects that he’s eager to start adding to the chromedecay site.

One added bonus: the first seven chromedecay digital downloads are now available again! Over the years, the links to those releases got broken since they weren’t originally hosted on the chromedecay server, making them unavailable. However, today they’re available again, and it’s like rediscovering an old friend. I had a blast listening to some of the old live sets, especially, and I hope you do, too.

Over the coming weeks and months, the site will be continue to change – the current site design is fairly spartan, focused more on getting the new content and WordPress installation running. There are probably still some small wrinkles left to be ironed out, too – I’ll be watching for that as time goes by.

Sharp-eyed readers may have noticed a change in the chromedecay site layout.

The biggest change comes in the site’s main page layout and formatting, which has been revamped to place more emphasis on the artistic output of the label – music, photos, events, and writing. There will still be some more tweaks here and there over the next month or so, but hopefully this new design will work out well.

To that end, I’ve set up this new domain, billvanloo.com, to host all my personal stuff – info about me, my personal blog, and family photos. This site is very much a work-in-progress at the moment, but will be added to in the upcoming days and months.

So, why the split? I just switched web hosting providers (to DreamHost, who I heartily recommend), and they offered a free domain regisration. Since I’d thought about having “billvanloo.com” for a while, I decided this would be a good time to acquire it, so I did. The thought of then splitting things up seemed like a natural one.

I’ll be using the chromedecay blog to post about my music, and about the music that I’ll be releasing. Read more about that in the next post.

Personally, 2004 was a great year for me in many ways. It saw the birth of my daughter, Hannah Elaine, another year of marriage to my wife Sarah, and my son Collin starting kindergarten. I also became more and more involved and active in my church, especially running live sound for both regular services and special events.

Musically, 2004 was a year of intense studio work punctuated by several performances. I was blessed to perform at the Shelter (Detroit) in January with my good friend Josh Schnable, debuting material that will be on our collaborative record to be released in 2005. I also traveled to Montreal with the thinkbox crew for a performance at the Mutek festival in June, which was a great trip and overall experience.

As far as thinkbox-related news for 2004, we released our second record, entitled “guitar”, in the thematic series thinkox editions. I had two tracks on that record, which made up the sum total of my recorded output that was released in 2004. I also made the hard decision to step back from my previous level of involvement with thinkbox and take the role of a contributing artist rather than a core group member. I will still be involved in thinkbox projects and events, however, and I treasure the work we’ve done together (and will continue to do).

Finally, looking foward to the future: I made reference to the fact that 2004 was a year of intense studio work, and a number of the projects that were worked on will finally see the light of day in 2005. My long-time friend Josh Schnable and I have been working on an album’s worth of material for around 3 years now, and that album is finally finished and being sent to various labels for release consideration. We’re both extremely excited about it, and can’t wait for it to be available to hear and experience.

I’ve also been working on a project of collaborations for the past year (initial production began in December of 2003) entitled “songs in the night”. This project has been very special to me, as it’s the first of my artistic endeavours to directly reference my Christian faith, and I’ve been blessed to be able to bring in a number of very talented guest artists to contribute, including Listener (Mush, Deepspace5), Double Helix (Transmat, Emoticon, Rush Hour), and others. The first 2/3 of 2004 were spent in production for the record, and I’ve been slowly working with the guest artists to put together the shared music we’ve been working on. I expect this record to be released in 2005 sometime, though no plans are certain as to label or release date at this point.