A few years ago, I saw an article on the excellent Strobist site, describing how you could build a cheap, easy macro studio in a box – the $10 Macro Photo Studio. I went ahead and built one, and it looked like this: 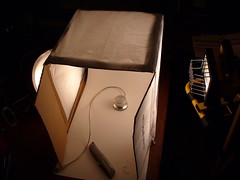 It was quite decent, but unfortunately got destroyed because it was too delicate and I never had a good place to store it (where do you stick a big, delicate box that’s mostly comprised of tissue paper?).

I therefore decided to build a new one for this week’s 52 things entry, making a few modifications along the way. I used the same idea as the original Strobist article, but made a few important changes. First off, I decided it would have to be collapsible, to prevent the issue I’d run into with the first one. As you can see below, this is what it looks like when unfolded: 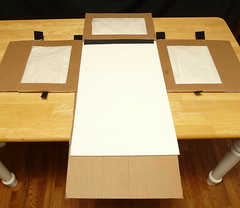 The sides are held together at the top and bottom with Velcro strips that allow it to be quickly assembled or broken down: 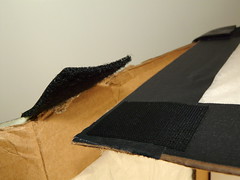 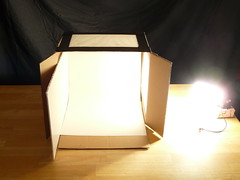 I shot a number of test shots using two flashes: a Sunpak 322s on one side, and a Vivitar 283 on the other side, and got excellent diffused light with minimal shadows, like this one of my son’s Bionicle invention (he’s got a bunch of Bionicles made to his own designs, using parts from the kits he has; check out his own site to see more of what he’s up to): 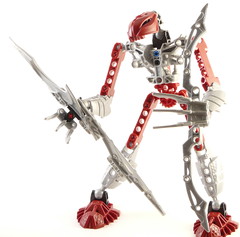 Unfortunately, the Sunpak died right at the end of my first test session, and I’m not sure why (it seems to get a charge, but the flash never fires). That means I’m down to one flash, the Vivitar 283. It works well enough, though, as you can see from today’s photos.

I decided to use this as a chance to do a roundup of some of the DIY photo gear I’ve made over the past year or two.

This is a DIY mic stand to tripod stud adapter. I have a number of mic stands in my studio, including a couple boom stands, but only one tripod. That makes it difficult to place my flash, cameras, etc depending on the situation (for my recent chromedecay behind the scenes video, for example, I used an overhead camera shooting down, mounted on a boom stand with this adapter). 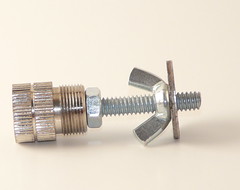 It’s just a metal stud that came with my mic stands, drilled out to allow a 1/4 x 20 bolt (the standard for tripod-mounted camera gear) to be passed through. A wing nut and washer allow it to be tightened onto whatever it’s holding.

I love these cheap clamps from Home Depot, and when you take the cushion off one of the arms, there’s a perfect spot to pass a 1/4 x 20 bolt through. That means it can be used either as a clamped tripod mount, or as a clamp on the end of a mic stand. 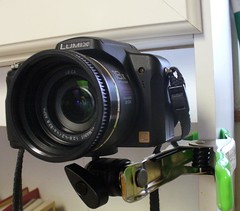 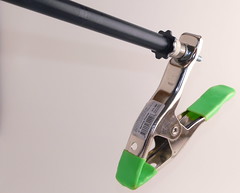 Finally, here’s a homemade diffuser (the “salsa bottle diffuser”) whose origins you can easily guess: 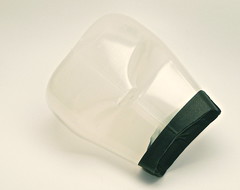 It slips over the end of the Vivitar and diffuses the light nicely.
Check out my Flickr set for more photos of the new Macro lightbox in action, and more DIY photo/video gear.