I’ve been doing a lot of work in the studio lately on various project. I thought it would be good to post about a few of the things I’ve been working on.

First, I’m really pleased to show off a new video that I made, demonstrating a technique I use a lot in Ableton Live for programming melodic sounds in interesting ways. It’s my take on an MPC-style chopped-up kind of approach. Here’s the video:

Also, here are some pics of studio stuff going on: 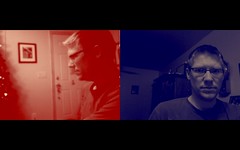 I’ve started playing around with QuartzComposer in anticipation of an upcoming Bill Van Loo & J. Schnable live set in mid-March, and this is a test shot from tonight’s session. Here I have input from two different video sources (a built-in iSight and an old Logitech webcam, powered by the macam driver) running into QC, going through a few color control choices, then being rendered out. 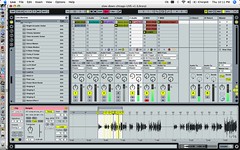 I’m working on a remix for the band Canasta out of Chicago. My good friend J. Schnable is playing piano for the band’s shows now, and he shot me a DVD full of stems from their song “slow down Chicago”. I’m rebuilding it in Live as a new remix.

2 Replies to “studio work in progress”