As promised in my last post (“Goodbye old Powerbook, Hello Intel MacBook!“), here are some further thoughts about the transition to my new laptop.

First off, my new MacBook arrived much earlier than I expected. I paid for 2-3 day shipping, and it arrived in two days, even though the FedEx tracking page said it came from Shanghai, China. Nice! It was quite a pleasant surprise to be awakened by the doorbell, with a cheerful FedEx delivery guy waiting to hand me a box containing the MacBook.

As expected, taking the new laptop out of its box was a joy. As countless people have said, nobody beats Apple at the unboxing experience, and this new laptop was no exception. I love the molded styrofoam inserts that have the word “MacBook” engraved in them. Think about that statement for a second – I just expressed affection for a piece of styrofoam. Now that’s identity design, and stirring up passion from the audience! 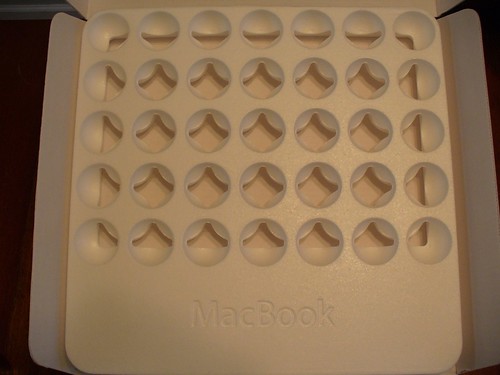 Once I got the new MacBook booted up and running, the next chore was starting to get all my data moved over, and all the programs I use installed. This was a pretty big task, since I had at least 20 different programs to install, and 25 GB of data to move over from various backups. On top of that, I decided that I’d finally consolidate my iPhoto library onto one machine instead of having it split across multiple CD and DVD backups – the new MacBook’s 120GB drive made that really easy. Many hours of importing photos later, I have about 5500 digital photos to sort out, label, and organize, but that’s 7 years worth of history – all 3 of my kids growing up, countless gigs, and all my more art-oriented photography. It’s going to be great to have it all in one place. 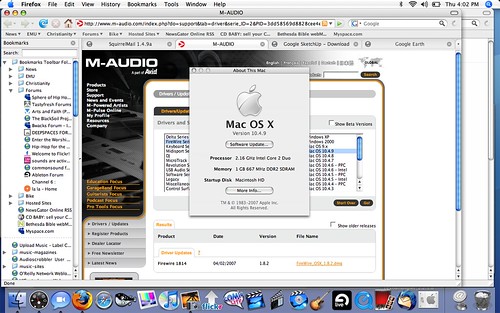 On to the software installation. There were really no big surprises here – I just kept plugging away at downloading the latest Universal Binary versions of the software I use from the Web, running installers, and so on. I don’t think I even had to restart more than once – the Cycling74 software SoundFlower required a reboot, but everything else just proceeded along smoothly. 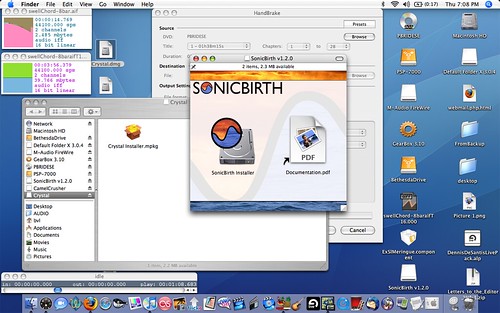 Here’s a partial list of everything I installed at first:

So, that’s a lot of software! On top of that, I had to reorganize all my music files. On the Powerbook, I had my hard drive split into two partitions, one for my operating system, documents, and applications, and the other for music stuff. On this new computer, I decided not to mess with partitioning the drive, and just kept it as one big partion, so what had been an “Audio” partition now is an “AUDIO” folder in the root of my hard drive. I think it should work fine, but it does mean some tedious work in locating samples inside Ableton Live, and so on. Ah well.

As far as my music software goes, I’ve really only played with Ableton Live so far. Acting on a tip from J. Schnable, I downloaded the Bismark BS-1 SoundFont player, and the jRhodes3 SoundFont set, and it sounds great! I think I’ve found my new Rhodes electric piano sound, which is nice since that’s a core part of my signature sound.

Things I still have left: I realized today that I hadn’t gotten my e-mail backed up from the old laptop’s hard drive, so I had to order a new external hard drive enclosure that fits 2.5″ laptop drives, which I’ll put the old hard drive into and use to pull over all my old data. Everything else had made it onto the FireWire drive I used for backing it up, but somehow, I missed the e-mail. Ah well – at least I have it!

That’s about it for now – thanks for reading! If you read this and want to help me pay for the new laptop, order any CD from the chromedecay catalog and I’ll waive or refund the shipping charge.

One Reply to “Intel MacBook: setup and first impressions”