This week’s post has been sitting in WordPress as a draft for almost 6 months – that’s how long I’ve been planning this one. This week, I did a photoshoot for Vertical Ambition Dance Company, a group of extremely talented dancers who are rooted in breakdance, hip-hop, ballet, and modern. 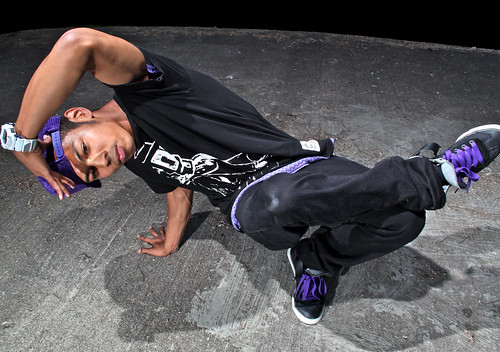 I first approached Jared, one of the VADC founders, about shooting photos of the company back in December of 2009, and it finally worked out to do a shoot this Monday evening. I knew I wanted to do this for free, as a creative collaboration (for a great read about this way of working, read this Strobist article about working for free).

I was lucky to have had a great chance to watch 3 or 4 hours of the “Studio Photography with Zach Arias” workshop on Creative Live as it was re-aired on Sunday night, so I was extremely inspired going into the shoot. I’ve been a big fan of Zach’s photography for a long time, as well as the sharing and teaching he does.

Before I ever picked up the camera, I looked at Flickr months ago for inspiration. Here are a couple of shots that I dug: 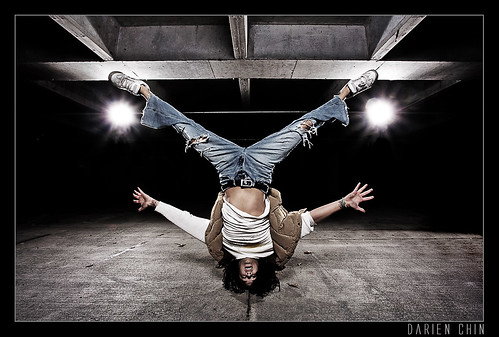 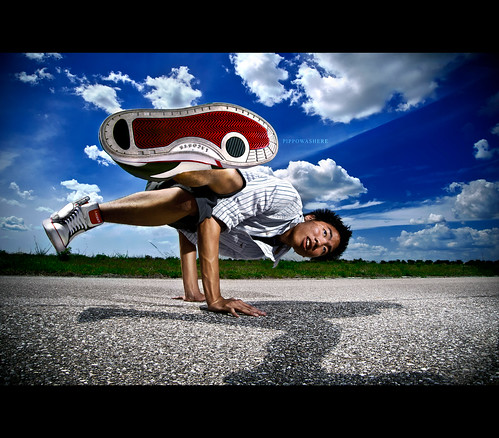 (PLEASE NOTE: The two photos above were NOT taken by me – they are photos from others on Flickr!).

Several things I noticed right away about many of the breakdance photos were extreme wide-angle shots, dramatic poses, and lots of low and close shooting angles. I knew I wanted to nail some of these, but also wanted some nice portraits of each dancer. I decided to shoot these basic portraits first as a way to get to know each of the dancers and get some easy shots in first. Here are a few of those portraits: 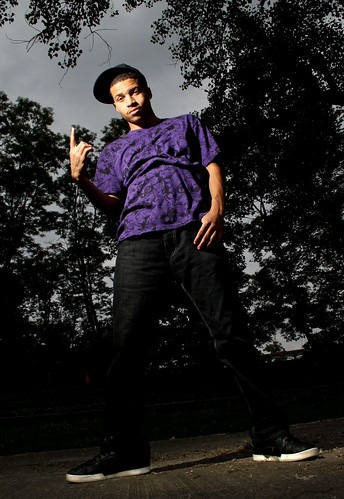 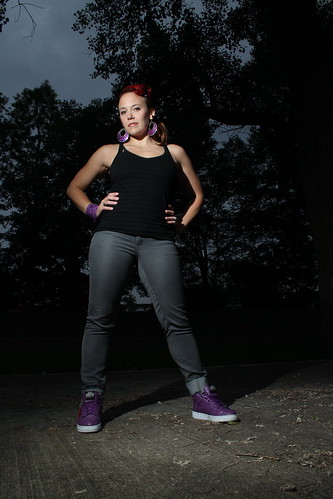 Here’s a setup shot showing the basic setup for these – one flash for the main key light, and another tightly-snooted flash to focus light directly on the box. 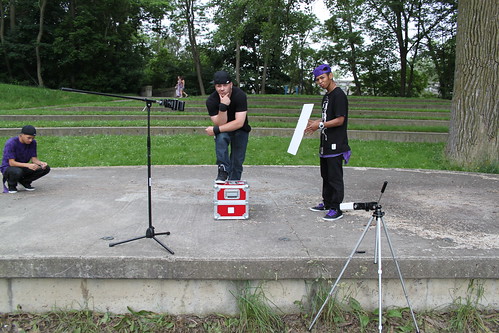 Here’s a “photo aware” shot showing both Jared (the main subject) and Shane (one of the VADC dancers who did a GREAT job of assisting me with lights & reflectors!). 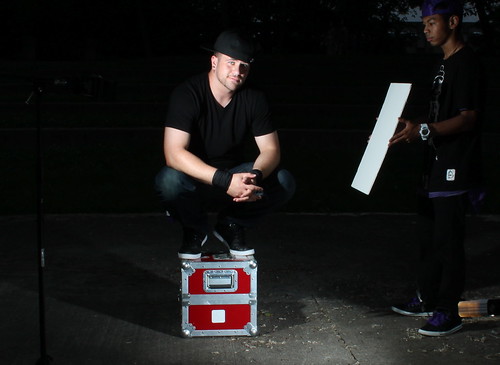 These were all taken at Frog Island park in Ypsilanti, on the concrete stage that sits on one end of the park. This was a great location – the concrete worked as a great texture, and it was a nice, level surface for the dancers. The mosquitoes were a bit of a pain (summer nights!) and we all sweated a bunch, but it was worth it in the end.

Here’s another setup, showing how we were using the location, and a few of the resulting shots: 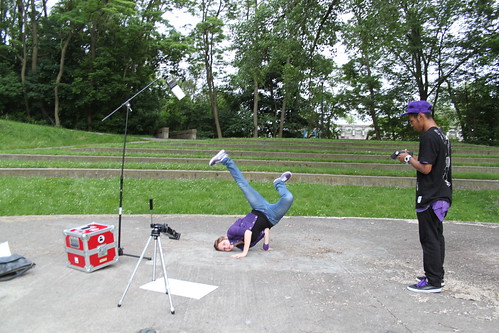 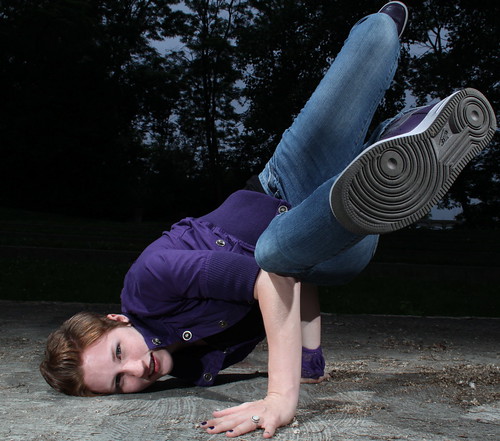 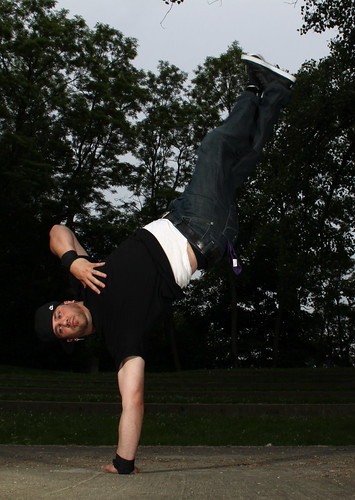 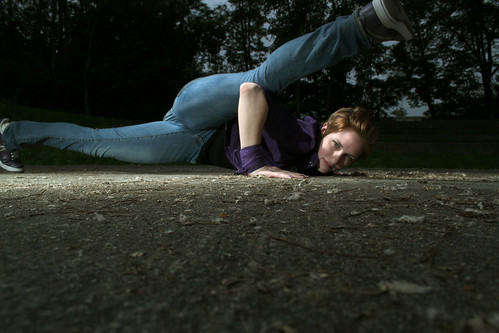 The final big shot of the night was a group shot where most of the crew dove to the side while Jared launched Shane up into the air. I never ended up with a shot I completely liked, but it turned out well enough. 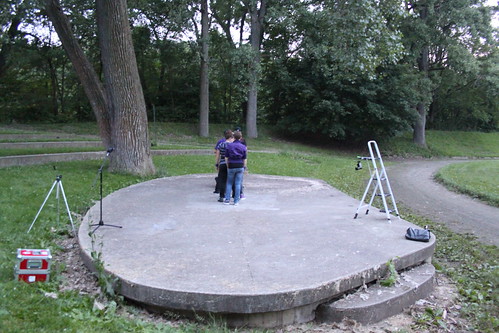 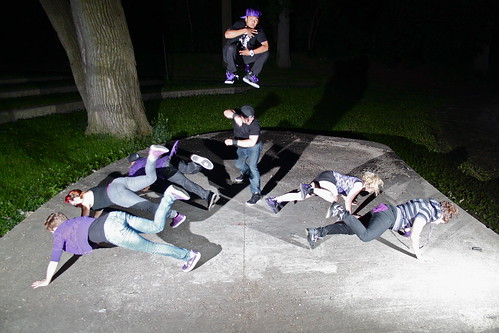 After we’d packed up and headed back to the parking lot to leave, I remembered that I wanted to get a quick photo of me with the crew, so I set a single flash down on my minivan’s roof, popped the camera on the tripod, and jumped in the frame. 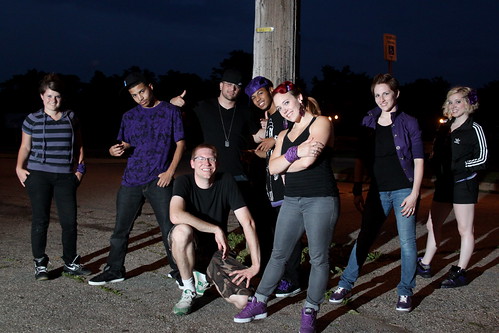 Overall, I had a fantastic time on this shoot – it’s maybe the most fun I’ve ever had taking photos. The main reason I’m going these photoshoots is to improve my skills (along with having fun!). I believe a big part of getting better is reflecting on what worked and what needs to change.

Here are the things I felt I did well:

Here are some things I’d change: